What’s The Fuss About #NoNutNovember?

The #NoNutNovember challenge is well underway. Thousands of people (mostly cis men) across the internet have undertaken the ultimate display of willpower and restraint — remaining ejaculation free for 30 days.

For kinksters, No Nut November is a welcome excuse to indulge in the kinks we love. Some even consider it “Locktober Part 2.” Many adventurous vanilla folks enjoy it for the kinky aspect too — whether they consciously realize it or not. Others use this fap-fast as a “sexual reset” of sorts hoping to give their sexual arousal and sensitivity levels a boost.

Despite its upsides, No Nut November has some damaging downsides that many eager no-nutters are unaware of. The “No Fap” movement is rooted in purity culture, far-right politics, anti-porn efforts, pseudoscience, and more.

Also, be sure to check out Aiden Starr’s #NoNutNovember message on behalf of the Chastity Dommes of Clips4Sale and their #NoNutNovember Survival Guide. 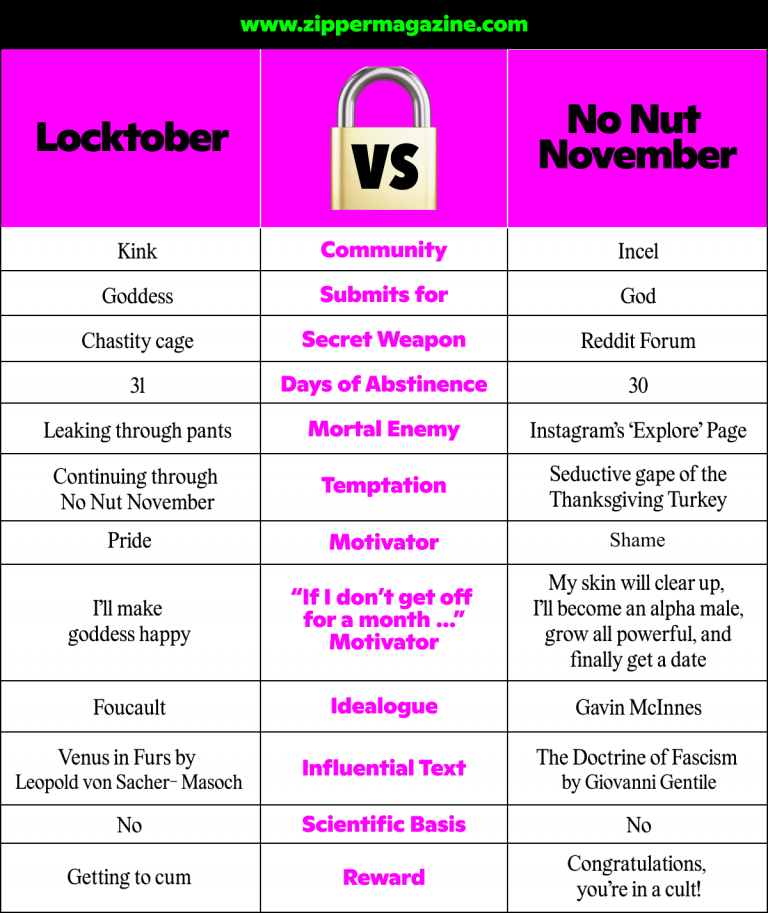 "Do We Tell No Nut November About Locktober?”

I’m Sunny Megatron, Kink and Certified Sexuality Educator and Editor-in-Chief of the BDSM-focused Zipper Magazine. And we need to talk about No Nut November.

I know it sounds fun — 30 days of putting your willpower to the test doing a challenge with everyone else on the internet. But I’m sorry to burst your um, bubbles — but every last bit of No Nut November is a bunch of BS.

If you’re one of my people (shout out to the kinksters) you might be saying, “but wait a minute, didn’t we just finish Locktober? An entire month of restraint and chastity? Yeah. “Isn’t that the same?” No.

Yes, it is true that both Locktober and No Nut November are about not making knuckle sandwiches with extra mayonnaise. But while the climax avoidance of Locktober is full of good-spiritedness and play, No Nut November is steeped in sexual shame.

Shame, you say? “Oh no, giving myself a hand has gotten so out of hand! I feel so humiliated! I think I need to be punished!”

No, no, no, no, no, I’m not talking about the kind of consensually roleplayed shame that we enjoy in kink. No, No Nut November isn’t the quirky internet challenge version of Locktober. It isn’t a “training wheels kind of way” for vanilla folks to explore chastity kink, and it’s not a strategy for couples to put the spark back in their relationship by making their hearts, and parts, grow fonder with absence … and abstinence. And it’s definitely not a movement to raise awareness about peanut allergies. The fact is, No Nut November has some dark, damaging, and dangerous associations that you need to know.

No Nut November is a byproduct of the #NoFap movement, it started in about 2011 on Reddit and spread to places like 4chan. And what kicked it off was a study that said testosterone gets higher with abstinence. That testosterone notion and a bunch of other weird health claims got meshed with the idea that pornography is bad and so is giving into temptation. And that by refraining from self-entertaining, these penis-havers (and a few lucky vulva-havers that can hang) could rid themselves of the evils of pornography addiction. And as a bonus, they’d become more masculine, more attractive, have more self-control, and ultimately become more alpha.

And I’m just gonna cut to the chase — No Nut November has been co-opted by the far right. Underneath the surface, No Nut November’s messaging is anti-porn, anti-sexual freedom, misogynistic, conservative, purity culture, ultra-religious propaganda wrapped up in memorable hashtags, funny memes, and the appeal of a social media challenge that makes you feel like you’re a part of something big, a community!

I’m gonna put more links about all that stuff in the description. But there’s something I got to get to. If all that dropped on you like a ton of bricks and you’re like, “womp womp — I kind of like No Nut November. I don’t know why, I just find it kind of fun and exciting.” Don’t worry, I got you!

So what is chastity? On the surface, it does sort of seem like what we do with No Nut November. The subject of traditional chastity is usually someone with external genitalia. But don’t worry, they’re not the only ones that get to indulge in the fun. But those that do oftentimes wear one of these, a chastity device to keep all that stuff locked up with a little lock and key. Isn’t it cute?

For partnered chastity subs, they’ll give the key to their partner and they’ll both engage in some Dominant/submissive play and exchange, and tease and denial throughout the month, or week, or however long they’re doing their chastity session for. Some engage in chastity solo. There’s all sorts of tips and tricks that you can use to have all the fun with yourself. There’s even apps you can use, all sorts of things. Other solo chastity subs sometimes choose to meet people online and engage in long-distance chastity play using all sorts of technology, video software, and lots of delicious things.

So now are you like, “wait a minute, so chastity and Locktober is just like No Nut November, but you have to buy gear?! No.

In kink, we are “consensually and intentionally perverting social norms and hierarchies for our pleasure.” Kinks like chastity are a form of play. Think of it as a game. And in that game, there might be humiliation or activities and behaviors that from the outside, look oppressive.

“You’re so bad! You’re such a loser! I can’t trust you because you’re always distracted by your selfish, self-indulgent, touching yourself, yuck!” That’s just an example. But it can take on many flavors. But even if that feels real at the time that it’s going on, it’s not real. It’s really an elaborate roleplay that you’ve negotiated ahead of time that you’ve set limits for parameters for. You’ve told your partner what your desires are, and worked together to create that fantasy experience.

With No Nut November, it’s real. You are really putting down those who act on their very normal and healthy sexual desires. You’re really actually saying that you believe adult entertainment is the root of all evil, and you’re really supporting organizations and movements that have visions of fascism dancing in their heads. No Nut November isn’t a kink. It isn’t a roleplay. It isn’t an improvisational fantasy storyline that you’re living out for fun. That’s the difference.

So what’s the appeal of chastity? So much! And it’s different for everyone. I’ll give you a couple of the common ones.

Anticipation: Now think about the important role that anticipation plays in your life. Anticipating that something good and significant is about to happen is joy juice for our brains. It might be anticipating that last piece of delicious cheesecake that you saved. It could be waiting all season to see the finale of your favorite show. It might be watching Dr. Pimple Popper trying to get that … you know — you hate it, but you gotta see it! You’re like “come on” and you’re like, “yes!” You know … you know. Or it might be climax.

When we prolong getting to the resolution of that built-up anticipation, sometimes gives us like, kind of a mental sadomasochistic high. Neurotransmitters and stuff. That giddy euphoric feeling of anticipation, even when it’s mixed with frustration in a playful, consensual way, can feel really good, especially over a long period of time.

Like if you’re wearing chastity for a week, a month, longer, it serves as a distraction and infuses some dopamine and enjoyment in your otherwise mundane day-to-day. And anticipating this positive event, everything becomes heightened — and when it’s something sexual and that becomes heightened? Hello!

Another reason: flipping the normative power script. Even though anybody can be a chastity sub, or a keyholder, or dominant in this situation no matter of their gender or anything else — when we’re talking more traditional chastity and keyholding, we often see that with heterosexual couples, where the man is the person who is the chastity sub, and the woman is the one who holds the key and calls the shots. Do you know what a rush it is to subvert traditional gender norms to challenge patriarchal ideas about sex and who controls it? Who desires it and who calls the shots, just flipping out on its head, hoo — that can be a rush for everybody involved.

And wearing a chastity device: That’s like extended foreplay that you can never relieve. So it just keeps building and building. You know, you feel it all the time. It’s a constant reminder of your commitments of your partner who cares about you, of you being naughty and being punished, or whatever gets your brain going. Also, it’s your dirty little secret. You’re out at the grocery store, you’re at work, no one knows what you’re wearing under your clothes. But you do. You can feel it and it’s always on your mind.

And for couples, playing with chastity can be sensual, it can get you out of that same old, same old rut. You know, put the spice back in your relationship. Because when you’re in chastity, that doesn’t mean you still can’t experience or give pleasure. You just have to be creative and do it in different ways. It expands your idea of what pleasure can be because intercourse and erections are off the table. That can remove sexual pressure and performance expectations. You don’t always have to be [rock hard]. And then you get to experiment with toys, mental arousal, physical arousal that doesn’t require ‘the thing’, all sorts of things. It gets couples not just talking about new ways to play, it forces them to do it.

There’s a lot more about chastity that I can’t fit in this video. So think of this as something to whet your whistle. You know, as an introduction to pique your interest, to get your curiosity going. I want you to head on over to zippermagazine.com to read more about orgasm control, and chastity, and also D/s and other kinks. There’s a lot there.

Plus, we have a resource library called Kinktopia, where if you find a particular kink or fetish that you’re really into, we’ve got all the books, we’ve got all the podcasts, all the YouTubes — all the places you can go to learn more about that thing.

If you’re not cool with all of the baggage that comes along with No Nut November but you would still kind of dig a … heavy sack? I don’t know, I tried to make a baggage pun! Did that translate? I don’t know! But anyway, that’s okay. But let’s call it what it is. It’s a kink. So now you know what to do. Let’s get you into chastity!

Giantess fetish has never been more popular. Across the internet, more & more (mostly) men are diving into this once obscure kink. What’s the appeal of being a tiny, bite-sized man at the whim of a powerful, giant woman? Giantess Katelyn Brooks tells us why she and so many of her fans enjoy these fantasies of control & capture.

Do We Tell No Nut November About Locktober?

We know you’ve barely recovered from Locktober, but brace yourself. #NoNutNovember — Locktober’s weird, religious cousin — is at the door, ruining our fun with a stack of bad science and fascist internet memes.

Caning Fetish & the Surprising Reason Behind Its Popularity

Why do people enjoy the sharp sting and intimidating “woosh” of a rattan cane? Pro Domme and lifestyle fetishist, Miss Ruby Marks shares caning basics plus digs into the fascinating cultural psychology behind this fetish.