While there’s no “One True Way” for structuring your power exchange relationship, what we see online and in pop culture often gives a different impression. That cookie-cutter example of what a ‘real’ dominant-submissive relationship is isn’t the only option.

Some kinksters have strong opinions on how power exchange should be done:

While some people may choose to configure their D/s dynamics along these lines, there certainly aren’t written-in-stone rules. Consent is the only mandatory constant, the rest of the details are up to you and those in your dynamic to agree on.

Not sure about how you can customize your D/s dynamic? Evie Lupine’s power exchange kink education video will give you some ideas.

Evie Lupine: Hello, everyone. My name is Evie Lupine. And today’s video is brought to us courtesy of a very special new project, Zipper Magazine.

Number one is that beginners can’t do real power exchange.

This is something you oftentimes see from people that have more experience that want to gatekeep the lifestyle. And either from a safety perspective, think that people who are newer can’t or shouldn’t engage in power exchange, because it’s just too risky and they don’t really understand what they’re getting into yet, or people that think that those who are newer to the lifestyle aren’t going to take it seriously and are just misusing the label for some reason. But this is absolutely not the case.

Like I said, many people get into BDSM for the reason that they want to engage in power exchange. It’s not just something that exists on only one level. Power exchange can be something that you kind of dip your toes into gradually over time. Rather than going right to the end and having big fancy signed contracts and wearing a collar, you can start just with really simple rules or a simple title and then build from there. So it doesn’t have to necessarily start off on the deep end, it can go at your pace, as you learn more about the lifestyle.

It’s interesting, because you can also hear the opposite of this, especially with male submissives where there’s the stereotype that male submissives in their everyday real life are powerful CEOs that just need to unwind and relax from their stressful careers. And that can definitely be true, but the fact that there’s two opposite stereotypes should go to show that there’s not really a lot behind this.

A lot of people believe that dominants have to be burly and overbearing and demanding not only to their submissive, but to everyone else they meet in life, they have to be alpha, they have to be in control of everyone. And that’s simply not the case. A lot of dominants are more shy and reserved.

There are many different styles and approaches both to being a dominant and to being a submissive and just because you happen to be submissive to one person, to your partner even, that doesn’t mean you’re submissive in your everyday life or that you are just a doormat for everyone else around you. That is just a really unhelpful stereotype and just because your everyday personality maybe doesn’t look like what erotica has told you a submissive or dominant looks like doesn’t mean that you won’t be able to find success and find a relationship in a power exchange capacity that works for you.

Number three is that D/s always involves romance and love.

Some people, they have a platonic partner, somebody who they are friendly with and on good terms with, that they have mutual respect with that isn’t necessarily somebody they have romantic or sexual feelings for. BDSM does not have to be sexual, it can be entirely nonsexual. It can be romantic, it can be non-romantic, it’s really up to you to design how you want your relationship to look and make sure you’re communicating that to other people, when you are trying to find relationships to make sure you’re going to be on the same page and compatible with what you want to get out of that dynamic.

Number four is that D/s always has to involve pain.

A lot of people, even people that are very experienced in the lifestyle, think that masochist and submissive always have to go together – when the reality is, is that it’s more like a four way graph where you have a dominant submissive and then masochist and sadist, you can be submissive and be a sadist. I’m one of those people. For example, you can be a dominant and be a masochist. There are correlations, but it’s more of a bell curve than it is something that is set in stone.

And you don’t have to include things like impact play, or rope bondage, or really any kind of kink that you don’t want to include in your D/s relationship. It’s more about what is going to work for your individual D/s, what’s going to speak to what helps you feel more submissive and feel more dominant. And for a lot of people that does involve things like pain, because that can be very vulnerable, it can be a very, very deep way of connecting. But if that’s not your bag, there are tons of other alternatives like service, like lighter rope bondage, that maybe doesn’t have any pain element to it at all sensory deprivation. You can do sensation play scenes, or you can just focus on the power of exchange itself.

Now finally, for number five – my big one personally, that I am really trying to break down is that a lot of people think that in order to have a D/s relationship, you have to have punishments.

Because of the way that many people construct their D/s relationships,they have rules, they have a contract – and of course, in order to enforce those rules, don’t you need to have a reward and a punishment?

But punishment doesn’t work for everyone, somebody may have a trauma history involving punishment, somebody may just not be motivated by it. And we know from studies of how the human brain works and how behavior change works, that punishment is not the most motivating thing for most humans.

And so you can also just have a relationship that is based around behavior modification and reward and positive reinforcement. And focusing on teaching the behaviors you want to see, instead of punishing the behaviors that you don’t want to see. They can work together, but you can with the right setup, with the right mentality have a relationship that doesn’t involve punishment. So if you are reluctant about getting into a D/s relationship, because you are afraid of the pain, you’re afraid of being punished, you’re afraid of doing something wrong, you can negotiate for a dynamic that doesn’t include those kinds of elements.

And that is really all that I have time for today. Those are my top five misconceptions about power exchange relationships. And thank you again to Zipper Magazine for collaborating with me on this project. I am so excited to see where this goes. And if you are excited like I am, you can go to ZipperMagazine.com to check out what it is they have going on.

And if you want to catch up with them on their social media as well I will have all that down below in the description box. That is going to be everything for today guys, stay safe, and I will talk to you all again very soon. Bye!

Beyond DD/lg: The Versatility of Daddy Play 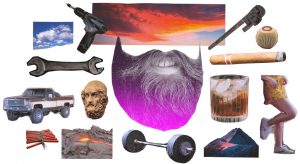