Why You Need BDSM's "Prime Directive"

I grew up finding proselytization abhorrent. I was raised in a church dedicated to a deity who never managed to capture my heart or soul, and the missionary work that is often required of “Christian youth” sent me into a confused, shameful panic. I always felt people need to find that which nourishes them, that god sure as hell didn’t need my help doing his thing. The public singing and tract distribution required of me when my Dad pushed us to join the Salvation Army was an absolute nightmare and I promised myself I would never ever try to sell my beliefs to others.

Then I discovered i was kinky, and all of that went out of the window.

Not because I wanted to drag everyone down to the dungeon and convince them that kinky sexytimes are the One True Way to Absolute Delight and Enlightened Bliss. Kink is NOT for everyone. What CAN BE for everyone are many of the pillars and ethical approaches that are frequently applied within our communities in order to continually strive to maintain mental, spiritual, emotional, and physical balance and safety. Once I began to learn these rules and guidelines, I began to feel that so much of what happens in the BDSM world needed to be brought to light and shared with the world. I still have the fantasy of becoming the Oprah Winfrey of Kink so as to spread The Good Words of Active, Informed Consent, Radical Self-Care, Emotional Safe-Words, and The Prime Directive.

When you look at Power Exchange relationships, that is, relationships that are based on someone giving over control of some facet (or all aspects!) of their lives to another, it seems obvious whose needs, wants, and desires come first. The master over the slave, the dominant over the submissive, top over the bottom. Or is it? You look at someone who is obedient to another person, serves their whims and wishes, and follows their commands. This seems straightforward: one takes, the other gives . . . pretty cut-and-dried.

But the fact is there are responsibilities on both sides of the coin. The submissive or slave in a power exchange relationship doesn’t just sign their love, body, mind, and soul away to some heartless emotional juggernaut bent on absolute domination!

Well, not for very long, if they do.

Language is important here. Look at the term I used to describe these consensual M/S (master/slave) and D/S (dominant/submissive) relationships. It is a power EXCHANGE. Not a power coup d’etat. Not a power grab. There is ebb and flow, yin and yang to these relationships. We are, first and foremost, humans interacting with one another. And acknowledging that all of us humans have human needs, human wants, and human desires is vital to the development of a healthy power exchange relationship.

It seems like giving up power to another person is a surefire recipe for disaster. As Lord Acton once said:

There needs to be a check-and-balance system in place: some way to calibrate the dynamic when things tip out of kilter. It would seem that there is a catch-22 here. How can one be in service, be subservient and obey while still standing up for and protecting one’s self?

Back when I first entered service and began exploring a formal M/S dynamic, I was given a bunch of guidelines; lists of “Do This Not That.” Pillars, Rules, and Protocols to memorize. All of these have fallen away in the intervening 25 years . . . save one. The core principle on which I base my consensual slavery…my humane servitude to another human being, is The Prime Directive.

Chill the fuck out, fellow Trekkers™ I’m not saying that submissives are abjured against interfering in pre-warp cultures. Of course, I wouldn’t want to go up against a Starfleet court-martial over it either.

There are many iterations of The Prime Directive, but the one I have settled on in my practice is the following:

“It is the primary responsibility of the slave to protect the master’s property at all times, up to and including protecting the property from the master themselves.”

Whatever your dynamic, however you exchange power, this system is a brilliant way to provide a fail-safe when things get rocky, or are in flux. What this does is place in the hands of the submissive the power and responsibility to prioritize their own well-being. And to remain active in handling issues as they arise, not sit on issues until they have the opportunity to fester and mutate into even scarier monsters.

This concept easily bleeds out into the Default World. Once you have seen the amazingness of radical self-care, you cannot unsee that shit. I began to truly realize how culturally most of us are not raised to prioritize our own needs. Sacrifice is often elevated to an unhealthy, lofty goal. That religious upbringing I mentioned? The religion that stresses “turning the other cheek” and who has, as their main icon, an ancient torture device?!? Not gonna teach me to take care of Mollena first and foremost.

I had a friend who is a single mom and we were chatting online about the sacrifices she has to make for her children. “But that’s what you have to do. My kids are my life. It’s not about me…” my friend said. I understood her point but countered, “Dude. Prime Directive. Let me lay some shit on you.”

I explained to her how we pervs managed the risk of emotional martyrdom by using this tool. She was dubious. “I have to sacrifice for them, regardless. They come first.”

“Hey look. I’m not saying leave the kids at doggie daycare and go to Vegas for a week with the cabana boy.” I insisted. “I’m saying make sure you take care of yourself. If you burn yourself out, who the hell is gonna take care of those kids then?”

It might seem terribly romantic to sacrifice yourself, your time, your body, in service to another. It is very fulfilling, for many people, to push themselves in their service. Those who eroticize the exchange of power often thrive in a situation where they can sometimes experience privation and hardship. It can be a means to growth.

If your physical, emotional, and spiritual health are not in order? You aren’t doing anyone any damned favors.

Some people are highly skilled and adept at making their feelings known. But all of us have times where, for whatever reason, it is just so difficult to share a problem. We would rather suck it up, buttercup, and suffer in silence rather than say “I’m having a problem. I need help.” For submissives, it can be even more challenging. Many people who identify as submissive or as a slave will prioritize their master or owner over themselves, without mindfulness, because they think that is what it takes to be a “good” submissive or consensual slave. But sacrifice made from fear is an incubator for resentment.

How elegant it is when the person who owns you says, “You are mine. And as my property, and the most precious property I could possibly be pleased to own, your first job is to maintain my property. To be transparent with me, to tell me honestly how you are, to share with me when you are struggling: this is how you please me. And furthermore? NOT telling me if you are troubled or struggling is in direct conflict with my wishes.”

But, with experience, I have seen how the seemingly oxymoronic Prime Directive actually means that masters and dominant types are able to fulfill their roles more effectively. A compassionate owner wants the best for their property. And they aren’t bloody mind-readers. I know, I know . . . some of them seem to be! It is critical that the owner knows that the person in service is capable of managing fear, anger, and resentment by shoveling and sharing their shit. And it is even more important that the slave/submissive-type person trust that this transparency, that honoring the relationship by honoring The Prime Directive, will be met with respect and compassion, and good faith by their owner.

For the dominant types? Give your submissive-type property this tool. We s-types will go to the ends of the Earth for you. By empowering us to filter our service to you through being in service to ourselves, we can bloom, thrive, and serve you with more power, deeper joy, and stronger trust. Fostering an environment in which a submissive hides their difficulties is a seed that will spring into a choking, twisting kudzu of bitter discontent that will strangle the roots of your relationship.

Within power exchange relationships, these checks and balances can mean the difference between healthy, nurturing, loving relationships and stressful, emotionally troublesome interactions. Applying The Prime Directive can help guide you in your mission to explore strange new worlds of kink, and to boldly go where no pervert has gone before. 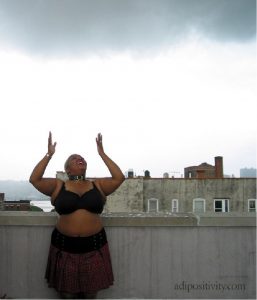 Mrs. Mollena Lee Williams-Haas is a multi-hyphenate mashup of award-winning writer-performer, International BDSM/Alternative-Lifestyle Educator and Titleholder, screenwritter/librettist/playwright, Consensual Slave/Muse, Sobriety advocate, Storyteller, Kink Doula and Podcaster. Actively involved in BDSM since 1995 and with a professional career as a performer since the age of 6, she has decades of seemingly divergent interests and lives that have converged gorgeously to her current incarnation. Try to keep up with her adventures on her podcast, All That And Mo. Follow her on TikTok, Instagram, Twitter and peruse years of her pontifications on ThePervertedNegress.com. You can actively support her work by becoming a sponsor on Patreon!

Social Media: A Battleground Between Kink and Censorship