At first, when you step off the train in San Francisco to go to the world’s largest leather event, you may feel a little awkward and out of place in your leather corset or your chaps and harness. You may notice a few curious glances from tourists from out of town, along with a couple of knowing grins. But once you begin the walk from Market Street down to the intersection of 9th and Folsom, you will see them emerging from buses, cars, and apartments – people in leather uniforms, people dressed up as latex ponies, people in neat suits with a leather harness flashing over a pressed shirt, people in booty shorts and a vest. Suddenly you will be in a flood of joyous leather folks and kinksters, all gathering on the last Sunday in September to celebrate the infamous, historical Folsom Street Fair.

The Folsom Street Fair has existed as long as I’ve been alive – 38 years and counting. It is the leather biker cap at the end of Leather Pride Week, which begins a week before with LeatherWalk, a sort of combination leather pride parade/fundraising walk that stops off at multiple famous watering holes with ties to the leather community. Folsom Street Fair attracts hundreds of thousands of people from around the world, and is the third biggest street event in California; pretty wild for a subculture long considered fringe. So, how did we get here, from a niche within a niche to one of the most popular events in San Francisco. 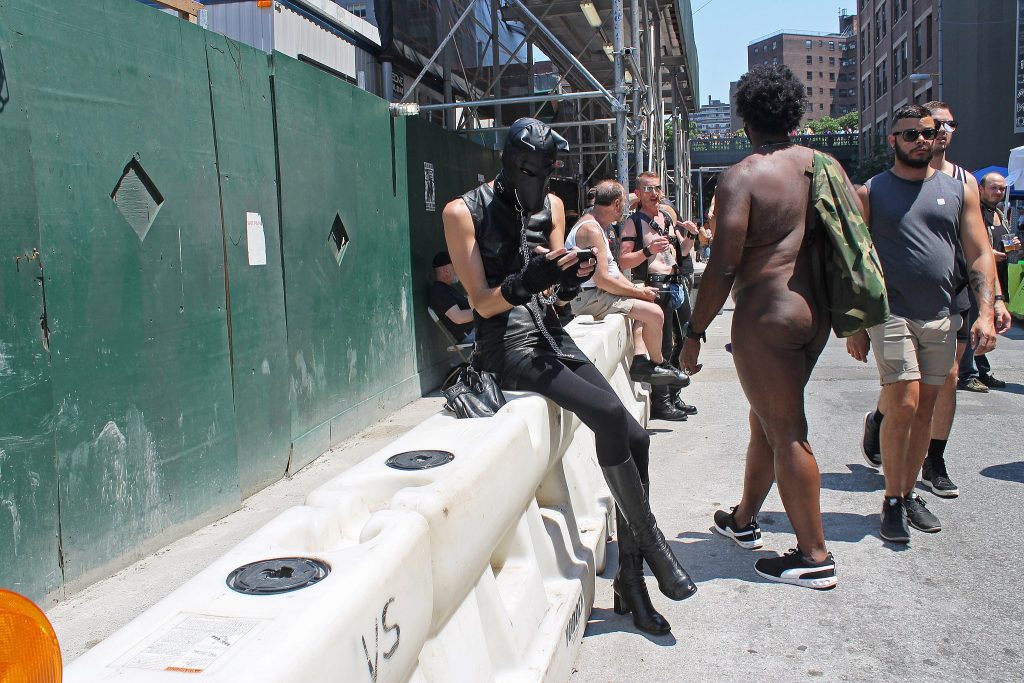 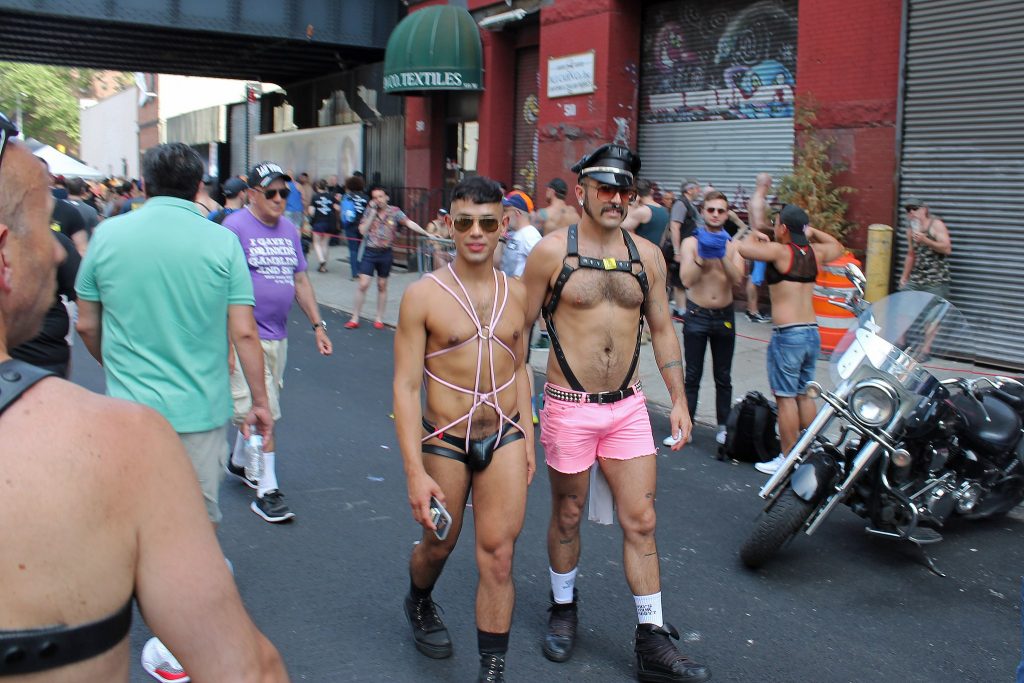 First, it’s important to understand why South of Market, or SoMa, is considered the leather district in San Francisco. From the 1960s to the early 1980s, more than 30 gay leather bars, bathhouses, and sex clubs thrived in the area, nicknamed the Folsom “Miracle Mile”. It was, by many accounts, a horny gay paradise, particularly for those gay men who didn’t feel the effeminate stereotype of homosexuality fit them. San Francisco’s SoMa offered another possibility, one which got national attention in 1964, when Life magazine published an article about homosexuality in America. Alongside the article was a photo featuring a mural on the side of the Tool Box, San Francisco’s first leather bar in the SoMa neighborhood. The mural, by local artist Chuck Arnett, was a black and white image of men in black jackets with chiseled jawlines. It was a siren call to gay men across the United States, who saw themselves reflected, many of the first time. While the Castro was the hotspot for gay politics, it was SoMa that was its throbbing libido.

Due to all that, it may surprise you to know that the first Folsom Street Fair was more of an anti-gentrification effort than it was a leather event. Called “Megahood,” it was organized by Kathleen Connell and Michael Valerio, two gay neighborhood activists who were generally more focused on fighting City Hall’s attempts to crack down on SoMa’s leather community in order to gentrify it. Valerio and Connell came together initially as part of the South of Market Alliance, speaking on behalf of affordable housing and community-driven economic development, instead of flooding the neighborhood with high-rise towers. The two realized that what they needed to bring the gay community together to protect SoMa was something that would unite pleasure and politics, much like local politician Harvey Milk had done with the Castro Street Fair.

And so, in 1984, Megahood was born. It looked very different from Folsom Street Fair today – in fact, only 3 leather-aligned organizations were present, with local artists selling their wares, musicians playing for the crowds, and 200 classic cars on display. The goal was to show that the Folsom area was not a blighted, abandoned neighborhood in need of revitalization, but rather an already vibrant and diverse community of people. It was an immediate success, raising money for charity, and for the first few years, it would double in size, then double in size again as word got out.

But while this was going on, so was the slow onslaught of AIDS, leaving devastation in its wake. The leather community was fundraising in every way they could to help support the AIDS Emergency Fund, Project Open Hand, AIDS hospices, and other community responses. Meanwhile, tens of thousands of people, mostly gay men, were dying of AIDS, while states debated whether or not to quarantine and isolate them from the rest of the community. SF politicians casually discussed how it would impact local politics if this “gay cancer” wiped all the homosexuals from the map. Citing public health concerns, gay bars and bathhouses were being shuttered by local governments. It seemed like all the political power that LGBTQ+ folks had managed to fight for was at risk of disappearing when it was most needed 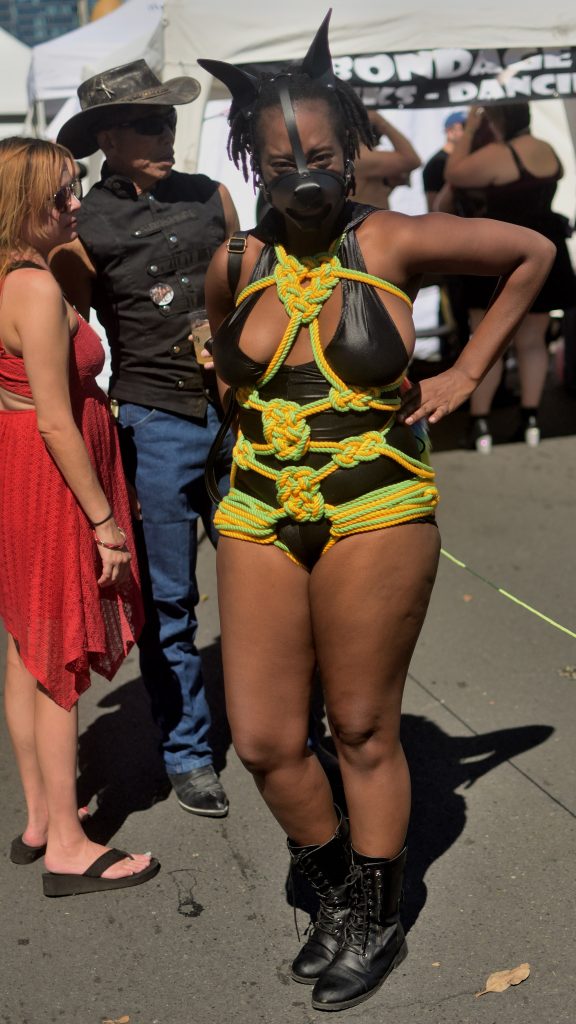 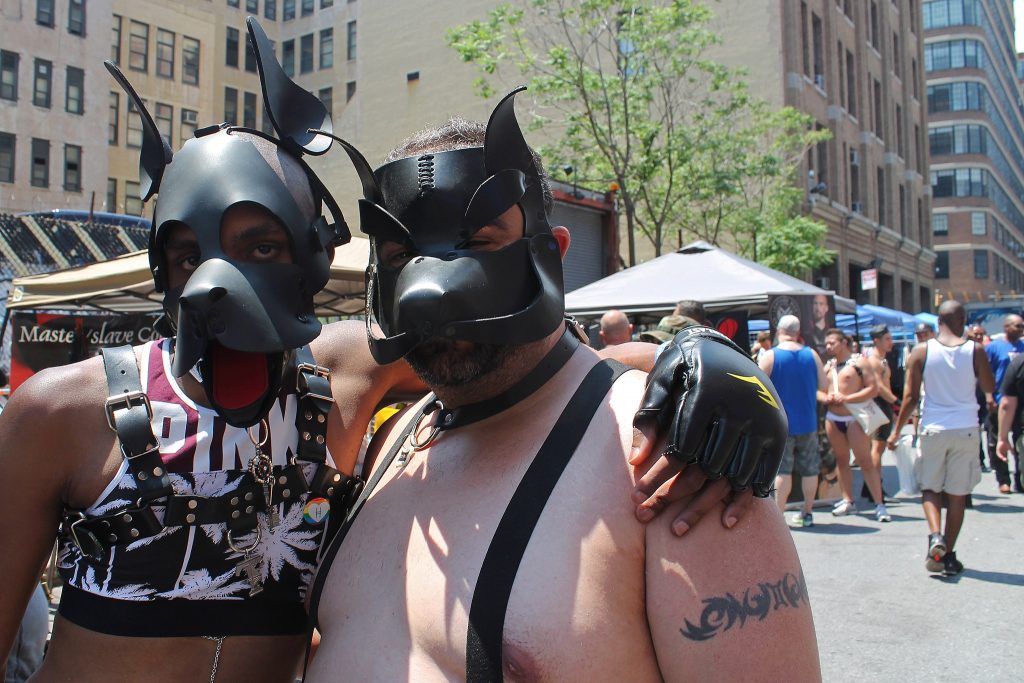 A pair of pups at the Folsom Street East Festival. Photo credit: istolethetv

In 1988, the leather community took the leash, turning the event into a celebration called Leather Pride Weekend. Leather title events, where men competed to be named Mr. SF Leather or Mr. Drummer (after the American leather magazine), became part of the lead-up to the community street fair. Set against the grim reality of death and grief, the leather community’s fundraising efforts, safer sex advocacy, and determination to maintain a symbol of community joy had some stumbles, but they managed to hold on tight and continue to raise much-needed funds for AIDS care. And in 1991, the scrappy street festival became named the Folsom Street Fair.

The mid-90s dealt with more struggles as multiple events competed on dates, splitting the dwindling gay community between Pride events, the Castro Street Fair, and another smaller leather event called Up Your Alley. Eventually, they collaborated and became consistent, turning each event into a bigger tourist destination for gay men who were finally finding hope in living again. The technology boom in the Bay Area saw gay men making more money than before, while the advances in medicine also meant that AIDS was becoming less of an immediate death sentence. As the dollars flooded in, SF City Hall began to see the value in the annual leather festival. Big sponsors began to sign up for Folsom Street Fair, like beer companies and airlines, which made local politicians even happier to look the other way when the end of September arrived. Porn companies focused on leather sex rubbed shoulders with major hotel chains without too much strain, and there were many years of pervy peace for that Sunday in September. 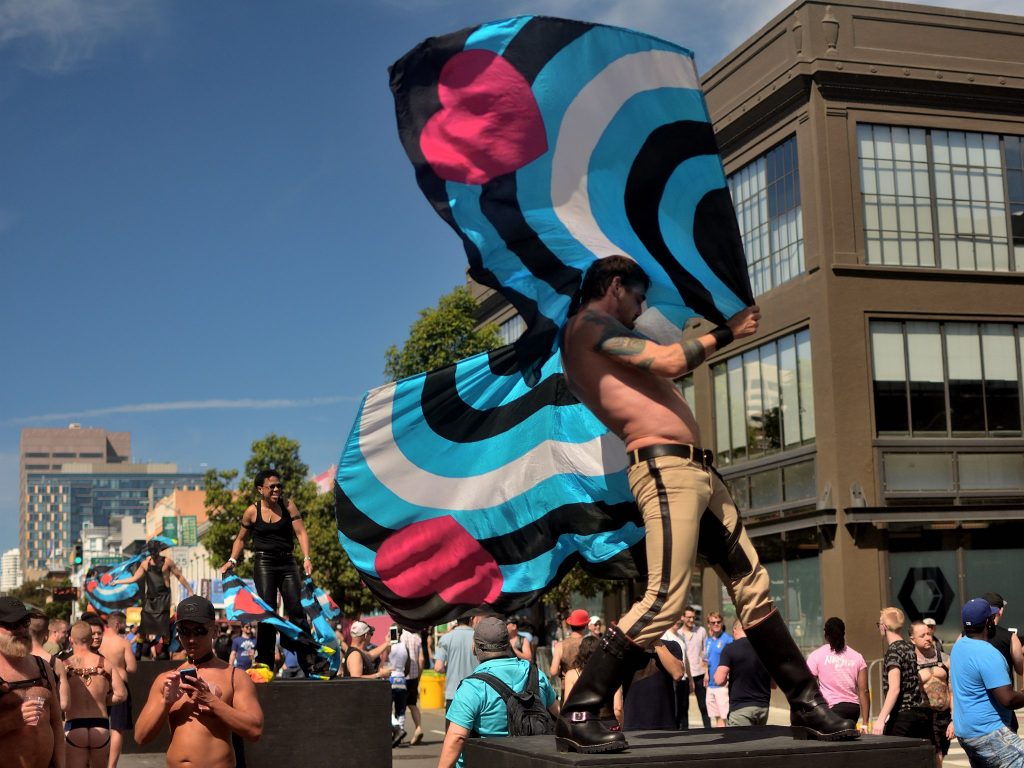 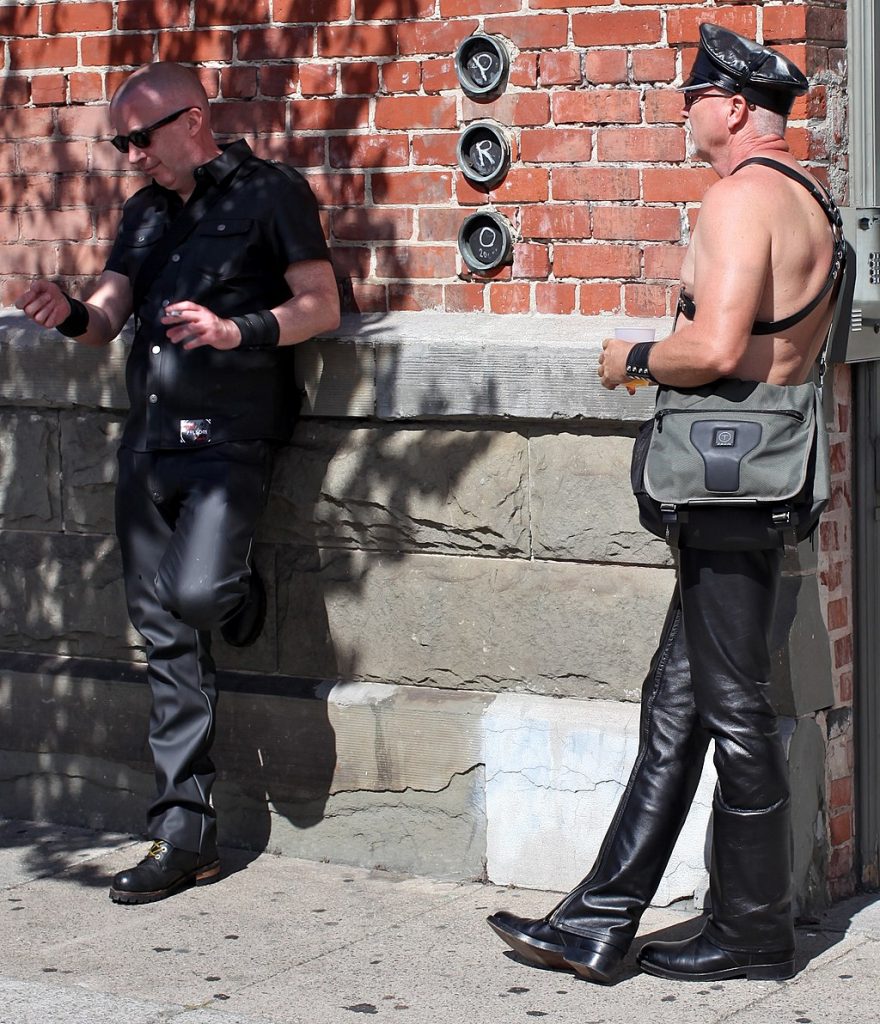 Folsom’s Visibility: A Blessing and a Curse?

Some in the leather and queer communities feel pushed out of their own space by those straight tourists who treat the Fair with the respect and subtlety of a bachelorette party at a gay bar. I know I’ve felt weirdly put on display by khaki-clad men with cameras who steal photos and vanish into the crowd, never even meeting my eyes. It’s a far cry from when I first began going, and I’ve certainly felt exhausted and on edge defending my body and image from those who don’t ask consent. Have the glory days of Folsom Street Fair already passed us by?

I would actually say no, that in fact, we need Folsom today as much as we ever did. Debates are constantly raging about whether or not it is indecent to be gay in public and in what ways gayness is deemed “acceptable”, even now, in this the year of our Lord 2022. These conversations about obscenity and perversion and queer sexual joy are still incredibly important battles that we have not won, not yet. Folsom Street Fair is a symbol of the leather community standing tall against city officials, against AIDS, against community despair, to say no to those that seek to sterilize our behavior. Its endurance shows that we do not have to concede to respectability politics to have a voice that still *matters*.

When you go to Folsom, whether it’s your first time or your 38th, whether you’re LGBTQ+ or straight, tread those streets with acknowledgment of how hard-won they are. Remember the leather boots that trod before you, fighting alongside battles against gentrification, refusing to be “cleaned up”. Participate in the event by lending a hand or volunteering some time, and consider that you are part of a proud lineage of mutual aid and leather community.  Know your etiquette as well as your history, and you’ll be welcomed with open arms at Folsom, to explore and express yourself alongside the rest of us joyful deviants

"Folsom Street Fair is a symbol of the leather community standing tall against city officials, against AIDS, against community despair, to say no to those that seek to sterilize our behavior." 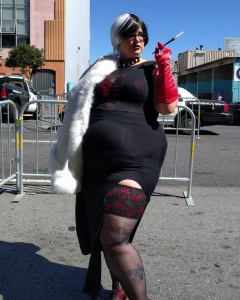 Kitty Stryker has been working on defining and cultivating consent culture for over 10 years through her writing, workshops, and website. She’s the editor of “Ask: Building Consent Culture“, and is especially interested in bringing conversations about consent out of the bedroom into everyday life. Kitty is currently working on a second book through Thorntree Press, “Ask Yourself: The Consent Culture Workbook”. She also works as a street medic for direct actions, plays Dungeons and Dragons, and cares for her two cats. Kitty identifies as a sex worker, queer, asexual, sober, anarchist and femme.

Want to be a Better Dominant? Learn to Seduce your Sub

We’re ALL Obscene in Their Eyes: Leather, Pride & Respectability Politics

“What bothers me … is the total lack of awareness of the hard-won history of LGBTQ+ rights that runs alongside this debate. Leather and kink have always been at Pride. It’s not a new phenomenon.”