Emily Adaire sat down with Zipper Magazine to talk about her journey as a kinkster and content creator. She tells us about some of the most memorable scenes she’s done, what’s on her kinky bucket list, and gives advice for those just starting to explore their kink and identity. Video transcript below.

Who is Emily Adaire?

Her stage name has interesting origins—she always loved the name Emily, and Adaire was inspired by the character Daisy Adair from Dead Like Me, who loves to talk about her sexual exploits with Hollywood stars. Pre-COVID, Emily had just a few videos under her belt, but during lockdown, she made the leap into webcamming and filming more videos. And all that lead to her filming for the top trans studios and becoming an award-winning content creator. In 2022, Emily won Best Trans Clip Artist and was nominated for Best Self Producer and Best Non-US Performer by the TEAs.

Where to Find Emily Adaire

Emily Adaire: Yeah, it’s totally cool to laugh during sex and just have fun and be a bit dorky sometimes.

What I would say to someone who thinks that their fantasies are weird, or who are ashamed about them, is that there will always be someone somewhere that into the same kinks as you are. And that you just should look for them and try to connect and exchange experiences. And maybe you can try it out together.

Three words to describe my sexuality are probably curious and versatile and situational, I’d say — becasue it really depends on what I’m in the mood for.

My personal sex life is a bit more vanilla, because I mean, on camera, I get to try out all this cool stuff and get a lot of playtime. So when it comes to my personal sex, yeah, I really enjoy spooning and making out and also doing some positions that just don’t look good on camera, but are really intimate.

I first discovered my kinks, I think I was still living with my parents, and I started realizing that it’s fun to stick stuff up your butt, even though I don’t recommend using household items. But I was too embarrassed to go to the sex shop. So I was just figuring out how to have fun with cucumbers and stuff like that. And then later, when I was in a relationship, I realized that I’m really into bondage too. So even though my partner wasn’t very talented rigger, so it was a pity but I really enjoyed it a lot.

So yes, I think there’s two things on the top of my bucket list and one is definitely gang bang. I really want to do that sometime though. I dread the organization of it. So I have to see if I can get someone else to do that part. The other thing I’d really like to try a suspension bondage. And I think it must be really exciting. And yeah, I can’t wait to do it sometime.

I think the best way to get started into kinky play, especially if you maybe feel . . . if you feel silly or something, that is just to embrace that feeling. I mean, it’s called play after all. So just enjoy yourself. Have fun, and I mean, laughing isn’t forbidden and nothing. Yeah, it’s totally cool to laugh during sex and just have fun and be a bit dorky sometimes.

Three words that my kinky play partners would use to describe me would probably be a caring, intuitive, and a little bit greedy.

Probably the most embarrassing thing that happened to me during a scene was in a shoot earlier this year. I shaved my legs in the morning and we started shooting on the hotel bed. And at some point, the producer stopped the camera and said, “where are these bloodstains coming from?” Because they were like tiny bloodstains on the bedsheet, and it was so embarrassing, and I felt so bad. And yeah, I mean, we were able to continue, and I hope they were able to remove it in post production. But I was so embarrassed.

When strangers ask me what I do for a living, I usually just tell them that I’m in video production, like really vague. And when they start to ask more questions, I say, Ah, yes, for advertisements, and I’m not allowed to talk about the clients I work for. So it’s really a pity. And the good thing is that because I actually do some kind of video production, I can talk about some, some tech and so on. So it isn’t too suspicious once they start asking a few questions.

How I got started in the business was in January 2020. So just two and a half years ago, even though it feels much longer, because there’s been so many cool things to experience. Yeah, I just had my DSLR from art school and started to film myself. The quality was really bad and just homemade stuff. But I had a lot of fun with it. And I realized there were a lot of people who really liked what I did and like to see me. So I started doing more and more and somehow it became a career.

The most art or interesting request I had ever was when I was still doing webcam and some guy took me into the private chat and asked me if I could work for him. And I did that. And later we had another session where I remember to bring 1.5 liters of carbonated soft drinks and was just by hoping for him for half an hour. It was a lot of fun. And I think he had a pretty good time, even though I’ve never heard of that king before.

One unexpected thing I learned about myself as I became a clip creator is that actually I really like order. Like, I always thought of myself being creative chaos, but I realized, okay, if you want to create something, you need to have systems in place to help you funnel that energy in a way so you don’t end up wasting your time and can actually do what you enjoy most

If I could spend one evening with whatever person I choose, I’d love to spend an evening with Kate Bornstein, because she’s such an icon and one of her books really helped me through some difficult times. And I think she’s really inspiring to a lot of people, especially to the trans community.

Flogging or bondage? That’s a really tough one for me. I’d say bondage.

Impact – thuddy or stingy? Definitely go for thuddy because I don’t know the stingy pain isn’t for me.

Leather or latex? Definitely leather. I love leather. I think it looks so hot. And with latex I never literally got into it. So leather, leather is prefered. 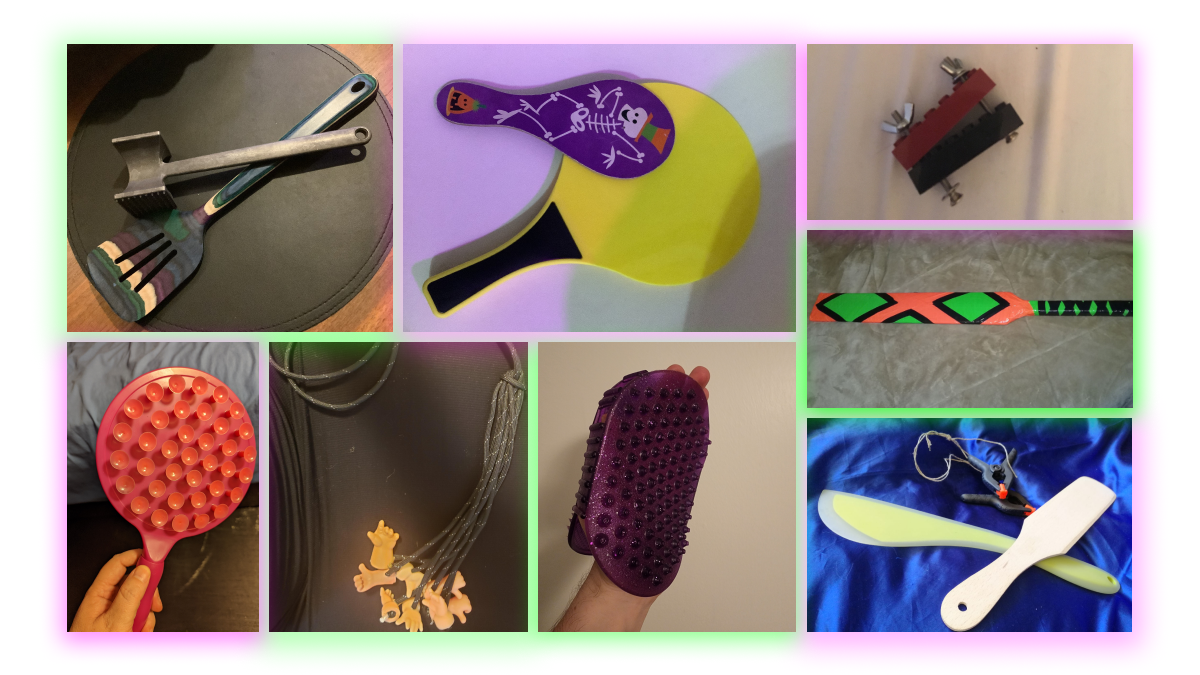 We crowdsourced kinksters to learn about their experiences repurposing ordinary objects for extraordinary fun. The success stories, snafus, and helpful tips they shared are a goldmine of pervertibles wisdom. This first-hand insight may just help you avoid DIY disappointment in the dungeon.

Want to be a Better Dominant? Learn to Seduce your Sub