In this video, lifestyle kinkster and Pro-Dominant of 22 years, Miss Maya Sinstress, tells us about her love for cuckolding. Maya explains the unexpected way she first stumbled upon this fetish, other kinks she couples with cuckolding in her personal play, and how on-camera cuckolding and lifestyle scenarios differ.

She also dishes out advice for those curious about living out their cuck fantasies – how to figure out what flavor of cuckolding suits you, how communication and consent works in cuckolding relationships, managing jealousy, where to find reputable kink resources, and more. Video transcript below.

Who is Miss Maya Sinstress?

Miss Maya Sinstress is the High Priestess of Pleasure and Pain. She is wickedly delicious and sadistic. Her two decades of experience and creativity make her one of the leaders in the professional community. Her play style ranges from high intensity to ultra seductress. She sessions in Las Vegas and Chicago and tours occasionally. Miss Maya Sinstress also offers custom videos, web, and phone sessions plus sells personal items. When she is not dominating, she promotes plant-based living and animal rights. She also loves taking road trips and traveling for spooky adventures. 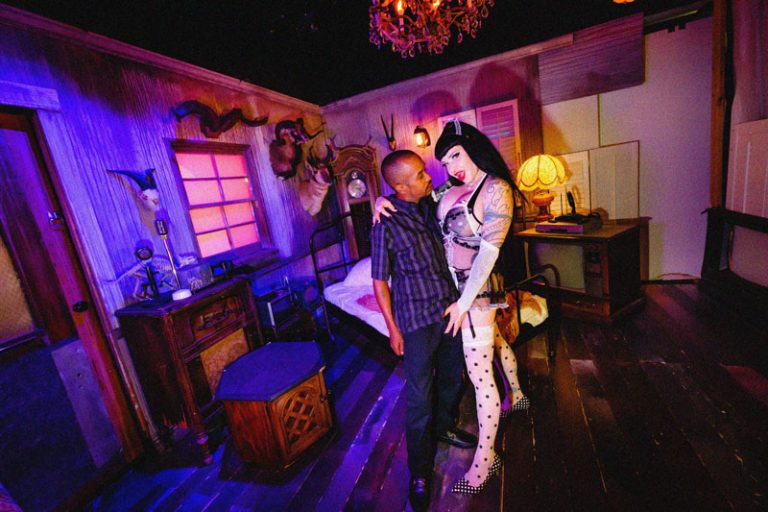 Where to Find Miss Maya Sinstress

Lucy this is too adult of language for you today. Can you go in the other room? Thank you, good boy.

What is cuckolding? When you look it up online, by definition, it always refers to the male gaze and the male aspect of what they want. But that’s not actually what it’s about. It’s about what the cuckoldress wants. Her being a highly sexual female that enjoys multiple partners, but has a partner that also enjoys watching her enjoy herself, making it about her pleasure, her experience, having fun, and aiding to that, contributing to that. So I don’t really like what the actual definition is that you look up because it’s more about female empowerment than it is about the male gaze.

Cuckolding can be multiple things. It can simply be that a male partner appreciates that his female partner is highly promiscuous and enjoys having a good time, enjoys being orgasmic with multiple partners, enjoys being a voyeur. Or it can have that element of being humiliating – and being degraded, put in your place. Talked to as if you’re an object or a lesser being that’s there for multiple purposes.

Some of the things that I personally enjoy about cuckolding are the humiliation aspect. That kind of having a main partner that you tease with, “don’t you want to see me enjoy myself?” And enjoying that that partner would then also get really excited by me kind of showcasing and exaggerating, and putting it out there that I’m going to have a great time with someone else. Maybe I’d lock him in chastity, so you’d be really turned on about it but there’s nothing you can do about it. You can just watch and observe.

A lot of people think with cuckolding, it could be more of like swinger lifestyle, which it could be. That’s a very consensual, with your partner activity. But it’s a mutual exchange. Cuckolding is very similar, where it’s very consensual. It’s not as if the female partner or myself is going out and picking up a random men that they’re not talking to their partner about. It’s discussed, it’s talked about, even if it’s a — whatever your rules are — if it’s a, “I’m at a bar, I’m looking at this person who knows I’m married. I’m interested in him. Are you interested in having me bring him home? Would this be exciting for you to watch?” And having that mutual discussion ahead of time, so there’s no surprises, it’s not cheating. It’s not that kind of like hot wife fantasy, it’s very different.

And from talking about it, you probably find out that your partner would be up for watching, participating. It could be very exciting for him, but frankly, as a cuckoldress this is based on my pleasure [laughs]. And even though I want my partner to have fun, it’s about my pleasure. But we’d talk about what would be exciting for him, or them, or her. “What would you like to see? How would you like to participate? Or just observe?” It opens up a whole dialogue when you’re open and honest and have that mutual respect, consensual cuckolding relationship.

One of my first experiences with cuckolding, I dated someone and neither of us were very sexually experienced. So as he and I were having interactions all the time, I didn’t know how to achieve that “O,” right? And it wasn’t happening. And this is completely amazing and I can’t make this up. But he felt bad that he couldn’t help me climax so he brought in one of his friends that would come and have sex with me and us, true story. And his friend was able to have me climax. So that became a whole, somewhat interactive, somewhat voyeuristic experience.

But that’s one of my absolute first relationships. And I think that kind of molded how I see men and relationships and also that’s just really fucking hot. So yeah, so through that I kind of got turned on by that aspect of cuckolding. He was watching appreciating, there was no humiliation aspect to it. But I was very turned on with seeing him getting off on my enjoyment of the situation. So yeah, that is an actual true story!

Thinking about bull in this situation is getting me all hot and bothered. Typically, the role of a bull is to be that alpha male, that stud that could be used as a prop, but he’s more than that. I would consider the bull to be more of a, you know, a co-top with me in the scene. Someone that’s hot, masculine can also take charge — not of me, mind you! Nobody takes charge of me. But they would also take charge in the scene and co-top. So he would talk to my cuck husband or my cuck slave in an aggressive way saying, “you’re gonna do this, you’re gonna watch this, you’re gonna get in this position.” Things that I might be thinking and want to say, but I’m enjoying myself far too much to have the capability of talking.

Are you a little shy? That’s okay, that’s completely okay. You don’t have to be embarrassed or shy, or feel reserved, or uncomfortable. It’s all natural to have those emotions and expressions. But you shouldn’t be ashamed of yourself. This is very common. A lot of people are into cuckolding, you don’t realize it, but it’s true.

There’s several ways you can explore it. And open up that dialogue with your partner. You can maybe bring up things like swinging. I think that’s more common where people understand what that is, and it can be talked about. You can bring up things you’ve in movies, on TV shows that inspired you that you thought was hot.

You can bring up, “Oh, was your coworker flirting with you? That was really, really sexy, I’m kind of turned on by it? How do you feel about that?” Just open up the dialog. Don’t be ashamed. Being open and willing to explore and being honest, is the best thing you can do in a relationship. Absolutely.

If you’re interested in learning more about cuckolding or exploring your kinks, there’s a lot of resources out there. You can simply look up the terms cuckolding, look at books. Kink Academy as a place I would recommend. There’s also amazing rope artists like Midori. There’s also you know, just amazing books called like Ethical Slut and things like that you can look up. Do some research, see what’s out there and explore. Knowledge is power. Or you could explore Zipper Magazine. There’s a lot have interesting articles in here and good reference points.

Alright guys, I’ve had a lot of fun with you today but I’m about done I need to go finish!

Everything you need to know about safewords

Netflix’s How To Build a Sex Room: A Kink Educator Weighs In

Pup Amp and Mr. Kristofer of Watts The Safeword take us on a journey to the kinky side of TikTok. They react to funny and educational #KinkTok videos featuring Margaret Cho, Mollena Williams Haas, Kinky History’s Esmé Louise James, Phrygian Monk, Sunny Megatron, and more.